Republicans, Democrats in congressional
‘Gang of Eight’ knew of operation 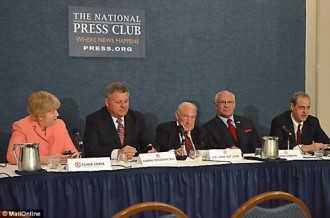 Breitbart, Nov 30, 2015 – The Obama administration pursued a policy in Libya back in 2011 that ultimately allowed guns to walk into the hands of jihadists linked to the Islamic State (ISIS/ISIL) and al-Qaeda (AQ) in Syria, according to a former CIA officer who co-authored a report on behalf of the Citizens’ Commission on Benghazi (CCB) detailing the gun running scheme.
In Congress, the then-bipartisan group known as the “Gang of Eight,” at a minimum, knew of the operation to aid and abet America’s jihadist enemies by providing them with material support. So says Clare Lopez, a former CIA officer and the primary author of CCB’s interim report, titled How America Switched Sides in the War on Terror, speaking with Breitbart News….
The 2011 “Gang of Eight” mentioned in this report was comprised of a bipartisan group of lawmakers from both chambers.

Clinton: ‘I know nothing’ about Ambassador Stevens’ meeting with Al-Qaeda affiliate

National Review, Oct 22, 2015 – It was revealed in today’s Benghazi hearing that on the day he was killed, Ambassador Chris Stevens reported in a wire to the State Department that he had met with Wissam bin Hamid, a warlord with al-Qaeda connections. When Representative Mike Pompeo (R., Kan.) confronted Hillary Clinton with a picture of Bin Hamid and the head of the al-Qaeda’s Ansar al Sharia group, Mohammed al-Zawahari, Clinton said she had no knowledge such a meeting took place. 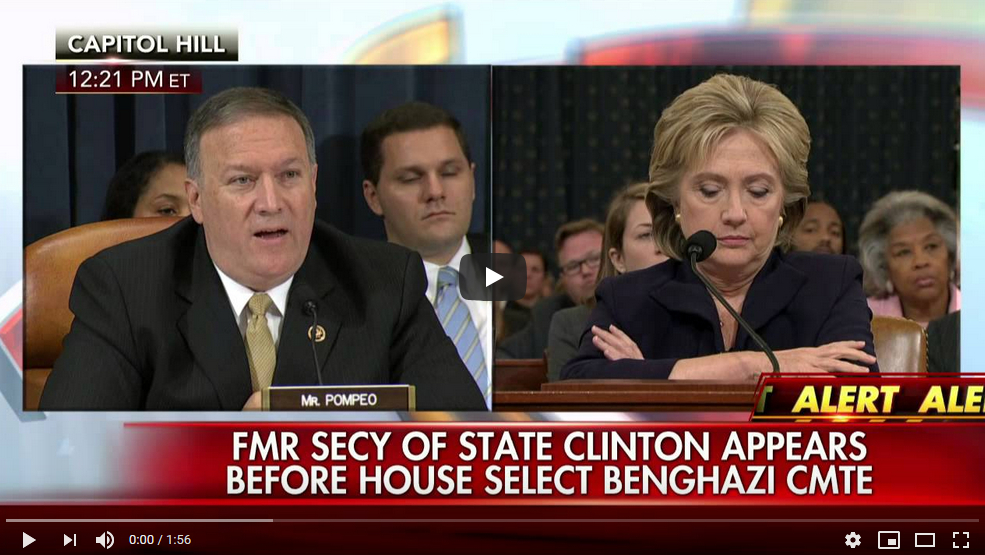 “Were you aware that our folks were either wittingly or unwittingly meeting on the ground with members of al-Qaeda hours before the attack?” Pompeo asked.
“I know nothing about this, congressman,” Clinton replied.

A check of the transcript, and also with Rep. Pompeo’s Washington office, indicated that this short, two-minute exchange was the only time in Clinton’s eleven hours before the House Select Benghazi Committee that this smoking-gun revelation was mentioned. It was buried approximately two hours into the hearing.  The revelation supports evidence gathered by the independent Citizens’ Commission on Benghazi that the U.S. and NATO were knowingly facilitating arms shipments to and from al-Qaeda affiliates in Libya during and after the revolution and deposing of Muammar Gaddafi, with the intention of forwarding those weapons to similar “freedom fighters” in Syria. For more information, see the video, Global Shakedown: ISIS, Ukraine and the New Cold War, embedded below.