Post-Brexit, the EU doubles down, vows to support, ‘invest in regional orders’ and ‘regional governance’ for North America, South America, the Middle East, Africa, and other regional blocs

By Tim Porter, CircumspectNews.com Nov 30, 2016
Surely, Europa is riding this beast. As if the abundant corroborating evidence compiled over decades of globalist “region-building” schemes were not enough to convince the American public of this threat to national sovereignty, along comes the European Union to give a rare, official confirmation of its intent. 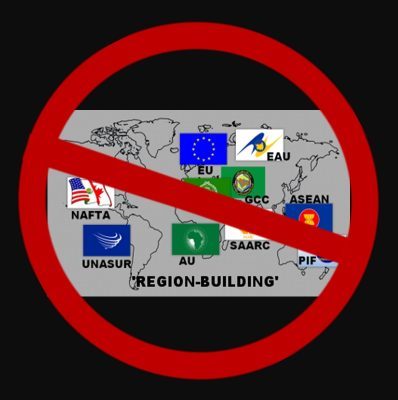 And as President-elect Donald Trump prepares to protect America’s borders and national security against the not-so-secret “open borders” agenda of Hillary Clinton and Washington’s swamp of embedded globalists, he will have to guard against a collusion of Washington and EU elitists bent on subverting his efforts.

The European Union Global Strategy document was officially released on June 28, just five days after the June 23 Brexit vote to leave the EU was passed by the British population. A major plank in the Global Strategy report identifies region-building as the means by which globalists aim to push the world incrementally away from nation-state jurisdictions. 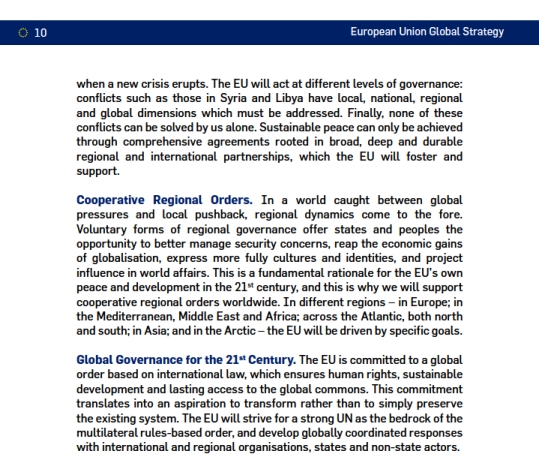 The EU’s arrogance to “invest in regional orders,” despite the concept’s rejection by national populations, is blatantly evident in Global Strategy. The document identifies “regional governance” as its fall-back objective between monolithic global governance and the “local pushback” of Brexit, Trump and other nationalist sentiments. Page ten of the document states:

“In a world caught between global pressures and local pushback, regional dynamics come to the fore. Voluntary forms of regional governance offer states and peoples the opportunity to better manage security concerns, reap the economic gains of globalisation, express more fully cultures and identities, and project influence in world affairs.”

Referring to the EU’s own development as a template, Global Strategy then identifies specific examples of “regional orders” that the EU intends to “invest in” and support:

“This is a fundamental rationale for the EU’s own peace and development in the 21st century, and this is why we will support cooperative regional orders worldwide. In different regions – in Europe; in the Mediterranean, Middle East and Africa; across the Atlantic, both north and south; in Asia; and in the Arctic – the EU will be driven by specific goals.”

Note the euphemistic way that Global Strategy identifies “regional orders” in the Americas: “across the Atlantic, both north and south.” Even in its arrogance, the EU is cautious here not to overly rile Donald Trump’s “deplorables” by directly stating the obvious: The globalists’ undeterred–now official–intent is to develop a North American Union, and to reign the nations of UNASUR (Union of South American Nations, along with Mercosur, the Common Market of the South) into their network of regions.

‘Ever larger units evolve’
Of course the EU’s euphemistic description of regional order across the Atlantic could also apply to a more distant goal, Hillary Clinton’s “dream” for the entire Western Hemisphere. Clinton described her dream, in a private speech to international bankers exposed by Wikileaks, as “a hemispheric common market, with open trade and open borders, some time in the future…” 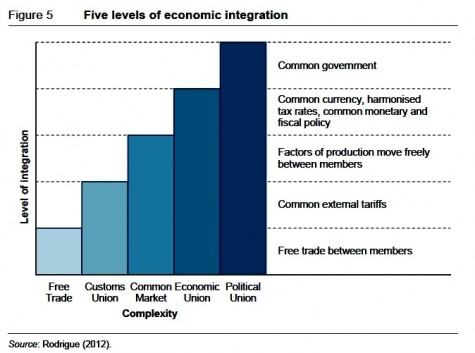 And that would follow the path outlined by globalist Lincoln P. Bloomfield, Sr., former State Department official and long-time MIT political science professor, who wrote in a 1962 State Dept feasibility study that world government could come about by incremental stages of regionalism, in which “ever larger units evolve through customs unions, confederation, regionalism, etc., until ultimately the larger units coalesce under a global umbrella….”

On this side of the Atlantic, globalist gurus Henry Kissinger and Zbigniew Brzezinski have echoed Bloomfield’s scenario of incremental regionalism. Kissinger, National Security Advisor and Secretary of State in the Nixon and Ford administrations, wrote in his 2014 book, World Order, that “The contemporary quest for world order will require a coherent strategy to establish a concept of order within the various regions and to relate these regional orders to one another.” And according to a 2013 Kissinger New York Times op-ed, this would come about by the emergence of “competing regional units,” in line with the Bloomfield model, and as the middle ground between The Chance for a New World Order and the current resistance of nationalist populations.

A Middle East Union?
The inclusion of an EU-style Middle East Union among the EU’s official wish list of regional orders may be implausible to many, but the concept is not new, and has been pushed by Washington swampers and European elitists for years. In June of 2014, New York’s Council on Foreign Relations think tank, from which Hillary Clinton is told what she should be doing, summed up this sentiment in an article on its website, entitled, The EU Offers a Model for Unifying the Middle East: It reads:

“Not long ago, Europe was a continent that resembled how the Middle East looks today…. Yet there is reason to hope Europe’s past and present can inform the Middle East’s future. Just as a warring continent found peace through unity by creating what became the EU, Arabs, Turks, Kurds and other groups in the region could find relative peace in ever closer union. After all, most of its problems – terrorism, poverty, unemployment, sectarianism, refugee crises, water shortages – require regional answers. No country can solve its problems on its own.”

In 2011, Senator John McCain, a long-time swamper, called for free trade pacts in Middle East, and for regime change in Middle East nations that are hostile to the “regional order that we seek to build” in that part of the world. In reality, U.S. foreign policy, foreign aid, and military strategy for decades have been directed more toward McCain’s type of region-building projects throughout the world than they have toward U.S. national security.

In 2009, Kissinger promoted the concept, predicating an answer on the future of the Middle East by stating that Islam would organize itself “either into larger states or one unit,” again repeating the phraseology of fellow globalist Bloomfield. 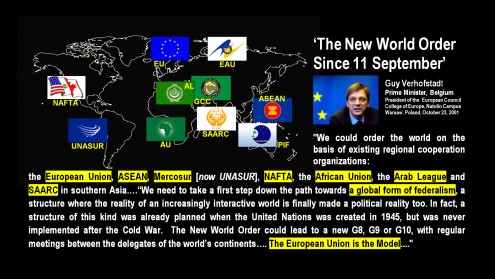 That same year, republican Congressman Paul Ryan, now Speaker of the House, preceded Hillary Clinton in taking his own pilgrimage to speak before the Council on Foreign Relations to promote a project from the George W. Bush administration, called MEFTA (Middle East Free Trade Area). Ryan even attempted to justify the project by saying it would be a jobs program for Middle East nations, something that Barack Obama would later take derision from republicans for advocating.

And in 2001, a month after 9/11, Belguim’s Prime Minister Guy Verhoftadt, who today has been given the European Leader Award as an outspoken member of the European Parliament, gave a speech entitled, The New World Order After 11 September. He called for a global federation of the world’s developing regional blocs, including NAFTA and the Arab League, using the incremental formation of the European Union as the model for all regions.

How TTIP, TPP would apply
The European Union’s Global Strategy is official confirmation that the globalists’ envisioned world order construct is not of a single, monolithic global jurisdiction–at least, not any time in the near term. The globalist vision is a federation of regional jurisdictions under the umbrella regulatory control of global and inter-regional institutions. Commerce and travel would be relatively open (albeit constantly monitored) within and among the various regions, but the regional bloc structure would remain in place for jurisdictional purposes, in a global, fascist distortion of how state jurisdictions currently exist within the federal structure of the United States.

That is where overlapping, inter-regional trade agreements such as the Transatlantic Trade and Investment Partnership (TTIP) and the Trans Pacific Partnership (TPP) were to come into play. TTIP and TPP are like mortar in a block wall: The mortar does not supersede or replace the blocks, it simply aligns and strengthens them. Similarly, regional jurisdictions would not go away in the ominous event of TTIP and TPP umbrella regulatory requirements. Rather, the blocs would actually emerge strengthened and brought into alignment within the globalist network, by the globalists’ “attempt to shape the rules” of each regional bloc, at the further expense of national independence and sovereignty.
Absent the Trump/Brexit pushback, the Lilliputian globalists would proceed unimpeded, and national sovereignty, like the sleeping giant Gulliver, would be overcome by a web of overlapping trade agreements and incremental region-building. Now that Trump has announced his intention for the U.S. to pull out of TPP negotiations on his first day in office, it gives hope that perhaps the giant has finally awakened in time to break free.