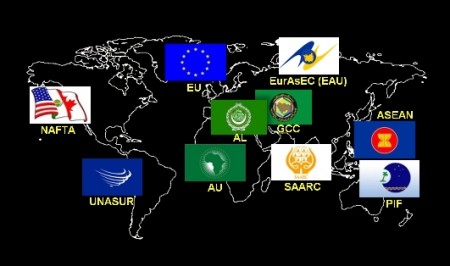 One Pacific Currency – Samoa Observer, June 8, 2011 – The call for Samoa to push one currency for the Pacific, including New Zealand and Australia, is gaining momentum. Made by Tautua Samoa Party MP, Motuopua’a Dr Aisoli Va’ai in Parliament, deputy Prime Minister, Fonotoe Lauofo welcomed the suggestion. 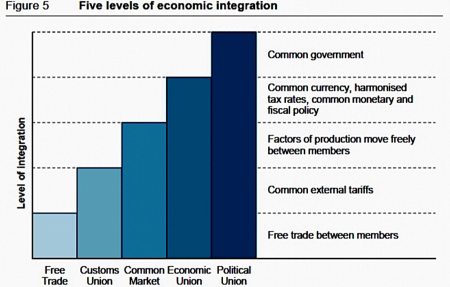 Australia and New Zealand could adopt single currency – The Telegraph (London), April 3, 2012 – Australia and New Zealand will consider adopting a single currency under a proposal jointly floated by the countries’ productivity bodies. The productivity commissions of the two nations indicated a shared Trans-Tasman currency could reduce business costs but pointed to Europe as an example of possible downsides. 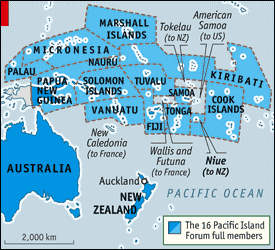 Thorny challenges for Pacific’s regional ‘pooling of sovereignty’ option – Scoop (New Zealand), Aug 4, 2014 – Representatives of Pacific Islands Forum (PIF) member countries gathered in Palau last week with an oceanic task on their hands: to revitalise their region’s premier political organisation…. The solution, according to the review team led by a former prime minister of Papua New Guinea Prime, Sir Mekere Morauta, is for the region to engage in some “pooling of sovereignty”, but not full integration.

Stronger Australia-New Zealand economic links, but no joint visa yet: joint document – Shanghai Daily, May 9, 2014 – Economic links and alignment of regulations between New Zealand and Australia are set to strengthen but the two governments have put off a proposal for a single trans-Tasman visa for visitors to both countries, according to a joint document released Friday…. However, the two prime ministers had agreed to allow international visitors attending the Cricket World Cup in 2015 to apply for a visa under Australian rules in order to enter both Australia and New Zealand.

Australia: A big brother or a big bully? – Islands Business, April 16, 2012 – Australia walks a tightrope when dealing with its small islands neighbours. As the largest and wealthiest nation in the region, it has clout. The nation’s population of 22 million is about twice the total for the rest of the members of the Pacific Island Forum—New Zealand included.

Trans-tasman union is more than economics – National Business Review (New Zealand), April 14, 2012 – New Zealand is not as important to Australia as the other way round….As an integrated economy, the whole could be much larger than the parts. Recent events in the eurozone have highlighted the need to have the economic, political and legal foundations, among others, sorted before embarking on others such as a common currency.

Opinions sought on expanding economic links with Australia – New Zealand Herald, April 7, 2012 – The Productivity Commission is seeking feedback on how – and how far – to deepen economic integration with Australia. Between the present situation, where there are few barriers to the movement of goods, people and capital between the two countries, and full political union lies what it calls economic union. That involves a common currency, common monetary and fiscal policy, and harmonised tax rates.

Kiwi or not Kiwi, that is the question – The Interpreter (Australia), May 4, 2012 –  This study by the Oz and Kiwi Productivity Commissions on the future of the relationship is really a set of questions for New Zealand about what further adjustments it is prepared to make to get closer to Australia’s economic strength. The study is an attempt to gaze out over the next 15 years towards a common currency and shared monetary and fiscal policies.

Australia, NZ Progress Toward Single Market – Global Tax News, October 19, 2012 – The Australian government recently introduced legislation to establish a trans-Tasman retirement savings portability scheme. The scheme has been described by the Australian Minister for Financial Services and Superannuation, Bill Shorten, as supporting progress toward the goal of a single economic market by removing a barrier to labour mobility between the two countries.

Currency union with Oz makes no cents – New Zealand Herald, April 12, 2012 – The advantages and disadvantages of a common currency, after all, is only one of 37 questions the paper poses. But it is a proposition which has in the past commanded considerable support among parts of the business community….Currency union would in effect involve not only adopting the Australian dollar but outsourcing monetary policy to the Reserve Bank of Australia, with perhaps a token Kiwi on its board.

RAMSI CAN BE A MODEL FOR THE WORLD, SAYS MARLES – Solomon Star, May 17, 2012 – Australia’s Parliamentary Secretary for Foreign and Pacific Island Affairs, Richard Marles, says the RAMSI [Regional Assistance Mission to Solomon Islands] mission in Solomon Islands can be used as a global model for foreign interventions….Troops from Australia, New Zealand, PNG and Tonga have been in the Solomons since 2003 when the Pacific Islands Forum sanctioned a regional assistance mission amid rising violence.

Big lessons learnt from small conflicts – New Zealand Herald, June 9, 2012 – Bougainville’s 10-year civil war between the central government and separatist groups launched a new process that saw the emergence of “determined regional co-operation”, initially between Australia, New Zealand, Tonga, Fiji and Vanuatu but later expanding to all 16 member states of the Pacific Islands Forum [PIF] in the Solomons. “These regional initiatives strengthened the sense among states of the region that their security was indivisible,” the study says….”The next step in deepening regional co-operation and preparedness would be to strengthen joint exercises in the Pacific Islands region, involving civilian, police and military personnel,” the study says.

Forum takes stock of 2011 Pacific Plan progress – Radio New Zealand, Dec. 22, 2011 – The Pacific Islands Forum secretariat has taken stock of progress in its Pacific Plan and says despite a number of challenges, it remains the strategy for regional integration.

Passport-free travel between Australia and New Zealand proposed – eTN Australia, April 23, 2012 – The Tourism and Transport Forum has proposed a “common border” between the two countries that would require only photo ID, similar to arrangements for domestic travel.

NGOs Critical of ‘Consultation About Consultation’  – Scoop (New Zealand), March 27, 2012 – The Non State Actor meeting is being organised by the Pacific Islands Forum Secretariat and hosted by the Australian government on March 26….“The negotiations on a regional free trade agreement are the most important economic negotiations facing the Pacific Islands and yet the Forum Secretariat and Australian government continue to do the bare minimum in regards to hearing from the people of the Pacific….”

EU increasing Pacific funding despite crisis – New Zealand Herald, June 13, 2012 – Denmark’s Development Cooperation Minister Christian Friis Bach, representing the European Council President, said said while some countries in Europe had had to cut aid spending, others – including Denmark and the United Kingdom – had increased it, despite the financial crisis….He and the European Commissioner for Development Andris Piebalgs were in Auckland yesterday for talks in the lead up to the Pacific Islands Forum…

European Union signs over €12 million for Pacific Tourism – Pacific.scoop, Dec. 22, 2011 – The European Union yesterday signed assistance of €12.3 million to increase Pacific-ACP countries’ ability to benefit from global trade and regional economic integration….The agreement was signed on 20 December 2011 between the EDF Regional Authorising Officer, the Secretary General of the Pacific Islands Forum Secretariat (PIFS), and the South Pacific Tourism Organisation (SPTO) as well as with the Oceania Customs Organisation (OCO) Secretariat in Suva, Fiji.

Climate change update: ETS amendment bill passes first reading – Lexology, August 28, 2012- …alignment between the Australian and New Zealand emissions schemes is an important consideration in the context of the Australia New Zealand Closer Economic Relations Trade Agreement. The review concluded that it was desirable for the two schemes to broadly work in harmony.

US Must Send Right Signals at Pacific Islands Forum – Scoop (New Zealand), July 21, 2012 – Is the United States upping its diplomatic engagement in the Pacific? One would think given rumors that U.S. Secretary of State Hillary Clinton is considering heading to the Cook Islands for next month’s Pacific Islands Forum (PIF). The problem: Her attendance could send the wrong message to regional partners; thereby undermining U.S. influence in the Pacific. Last year, the United States sent its largest and highest-level delegation ever to the PIF.