Globe and Mail (Canada) May 21, 2007
http://www.thebellforum.com/showthread.php?t=957&page=1 http://www.theglobeandmail.com/servlet/story/RTGAM.20070521.wrxdodge22/BNStory/Front
WASHINGTON — Bank of Canada Governor David Dodge says North America could one day embrace a euro-style single currency. But to get there, Canada, the United States and Mexico must first tear down barriers to the free flow of labour, which he pointed out Monday have “gotten a bit thicker” in recent years. Answering questions from the audience after a speech in Chicago, Mr. Dodge said a single currency was “possible.”

Landry Calls for Currency Union in the Americas

“[ NAFTA ] will represent the most creative step toward a new world order taken by any group of countries since the end of the Cold War. [ NAFTA ] is not a conventional trade agreement, but the architecture of a new international system.”
Kissinger was National Security Advisor and Secretary of State in the Nixon and Ford administrations.

“In recent years a new international system has been developing, oriented toward the establishment of norms and principles of universal jurisdiction, above national sovereignty….
The construction of new rules of international co-existence must continue…we are actively participating in various forums in the construction of this international architecture….
Eventually, our long-range objective is to establish with the United States, but also with Canada, our other regional partner, an ensemble of connections and institutions similar to those created by the European Union, with the goal of attending to future themes as important as the future prosperity of North America, and the freedom of movement of capital, goods, services and persons.”

“We cannot leap into world government in one quick step…. The precondition for eventual globalization –
genuine globalization – is progressive regionalization, because thereby we move toward larger, more stable, more cooperative union.”
Brzezinski was National Security Advisor for President Jimmy Carter.

America Abroad: The Birth of the Global Nation

Strobe Talbott, Time Magazine editorial 7-20-92
“Here is one optimist’s reason for believing….nationhood as we know it will be obsolete; all states will recognize a single, global authority. A phrase briefly fashionable in the mid-20th century – “citizen of the world” – will have assumed real meaning by the end of the 21st century….The cold war also saw the European Community pioneer the kind of regional cohesion that may pave the way for globalism.”
Time editor Talbott, Bill Clinton’s roommate at Oxford in the globalist Rhodes Scholarship program, became Clinton’s Deputy Secretary of State under Madeline Albright.

Memorandum for the President

New York Times 4-18-04 ….[T]he tribunal declared a Mississippi court’s judgment at odds with international law, leaving the United States government potentially liable for hundreds of millions of dollars…. “This is the biggest threat to United States judicial independence that no one has heard of and even fewer people understand,” said John D. Echeverria, a law professor at Georgetown University…. The availability of this additional layer of review, above even the United States supreme Court, is a significant development, legal scholars said….The tribunals have the potential to upset the settled American constitutional order.

The Rise of the Fortress Continent

The Nation – February 3, 2003
http://www.thenation.com/article/rise-fortress-continent ….”Fortress NAFTA,” a continental security perimeter stretching from Mexico’s southern border to Canada’s northern one…. It’s a model being pioneered in Europe, where the European Union is currently expanding…. It took the events of September 11 for North America to get serious about building a fortress
continent of its own…. What we are seeing is the emergence of a genuinely new New World Order…

‘A World Effectively Controlled by the United Nations’

Lincoln P. Bloomfield, March 10, 1962. Corporate Author: INSTITUTE FOR DEFENSE ANALYSES, ALEXANDRIA, VA. Prepared for IDA in support of a study submitted to the Department of State under contract No. SCC 28270, February 24, 1961.
“A ‘normal’ historical process, in which ever-larger units evolve through customs unions, confederation, regionalism, etc., until ultimately the larger units coalesce under a global umbrella, could take up to two hundred years, on past performance figures, and even this may be optimistic….
“I have suggested that an alternative road may bypass the main path of history, shortcircuiting the organic stages of consensus, value formation, and the experiences of common enterprise generally believed to underlie political community.
This relies on a grave crisis or war to bring about a sudden transformation in national attitudes sufficient for the purpose.
According to this version, the order we examine may be brought into existence as a result of a series of sudden, nasty, and traumatic shocks….”Thus a hypothetical model can be constructed, fulfilling the characteristics of “a world effectively controlled by the United Nations.”….We concluded that in theory it could come about in the short, medium, or long run by a brink of war — or a war — combined with the development of evolutionary trends that might favor it as the time span stretches out.” http://oai.dtic.mil/oai/oai?verb=getRecord&metadataPrefix=html&identifier=AD0277087 Read full document…

Robert Pastor, a leading intellectual force in the move to create an EU-style North American Community, told WND he believes a new 9/11 crisis could be the catalyst to merge the U.S., Mexico and Canada. In May 2005, Pastor was co-chairman the Council on Foreign Relations task force that produced a report entitled “Toward a North American Community” which he has claimed is the blueprint behind the SPP declared by President Bush, Mexico’s then-President Vicente Fox, and Canada’s then-Prime Minister Paul Martin.
….”The 9/11 crisis made Canada and the United States redefine the protection of their borders,” Pastor explained. “The debt crisis in Mexico forced the government to adapt a new economic model. The crises oblige the governments to make difficult decisions.”

….The three announced an initiative dubbed the “Security and Prosperity Partnership of North America,” [SPP] which is designed to establish a common continental security perimeter against outside threats while facilitating the legal flow of people and trade across shared borders and increasing cooperation on energy, the environment and bioterrorism.
Among other things, the three governments agreed to develop standardized rules for screening people and cargo arriving in North America, regardless of which country is the first point of entry…. But against the backdrop of security concerns, the three leaders [George Bush, Vicente Fox, Paul Martin] said they want to build on NAFTA and enhance economic integration to better compete against surging competitors such as the European Union, China and India. “North America should be the most competitive region in the world,” Fox said.

[Mexican President] Vicente Fox voiced support for a European Union of North America, an institutional arrangement that would eventually result in the creation of a common market, the free movement of labor, and a common currency. Professor Robert Pastor of American University supports the creation of a North American Commission, a North American Parliamentary Group, and a permanent North American Court on Trade and Investment to replace the current NAFTA panels.
….In a recent survey, about a third of Canadian business leaders supported an EU-style integration in North America…. A 2002 report released by the Canadian House of Commons’ Standing Committee on Foreign Affairs …strongly endorses closer economic and security ties, including the formation of a security perimeter and perhaps even the establishment of a North American court dealing with trade and investment issues.
….Top officials know that proposals leading to major deviations from the status quo would have to originate in Canada or Mexico and not in the hegemon that physically separates the two. Canadians historically have worried about the possibility of economic integration leading to political integration…
CSIS founder: former Secretary of Defense David M. Abshire. Chairman: former U.S. Senator Sam Nunn. President and CEO: former Deputy Secretary of Defense John J. Hamre. Zbigniew Brzezinski is counselor and trustee and co-chairs the CSIS Advisory Board. A link to this report was posted on the U.S. Embassy-Canada website until 2008
. 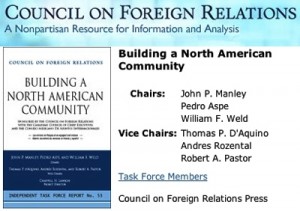 Independent Task Force on North America,
Sponsored by the Council on Foreign Relations (CFR), May 2005

….To that end, the Task Force proposes the creation by 2010 of a North American community to enhance security, prosperity, and opportunity. We propose a community based on the principle affirmed in the March 2005 Joint Statement of the three leaders that ‘‘our security and prosperity are mutually dependent and complementary.’’ Its boundaries will be defined by a common external tariff and an outer security perimeter within which the movement of people, products, and capital will be legal, orderly, and safe.
….Lay the groundwork for the freer flow of people within North America ….A long-term goal for a North American border action plan should be joint screening of travelers from third countries at their first point of entry into North America and the elimination of most controls over the temporary movement of these travelers within North America.
Task Force co-chairmen: former Massachusetts Governor William Weld, former Finance Minister Pedro Aspe of Mexico, and former Deputy Prime Minister John Manley of Canada.

Toronto Star, February 2, 2011 OTTAWA — After months of secret negotiations, Prime Minister Stephen Harper and U.S. President Barack Obama are expected Friday to authorize the most sweeping overhaul of Canada-U.S. border and security cooperation in decades….The deal…could pose the biggest challenge to Canadian sovereignty since the free-trade negotiations of the 1980s….It would essentially see Canada and the U.S. moving toward a shared security perimeter around the two countries.….It calls for closer cooperation among police, security and military officials, as well as shared border management facilities, increased exchanges of law enforcement information and enhanced cooperation by authorities on both sides of the border to verify travellers’ identities…

US senator calls for free trade pacts in Middle East

Daily News Egypt, May 20, 2011
http://www.dailynewsegypt.com/2011/05/20/us-senator-calls-for-free-trade-pacts-in-middle-east/
WASHINGTON (AFP) – Senator John McCain said Thursday the United States should “move urgently” to establish free trade agreements with Egypt and Tunisia but cautioned against increased spending in the region.
….”We should move urgently to begin negotiations on free trade agreements with Egypt and Tunisia — and to explore ideas for new free trade areas in the Middle East and North Africa.”
…But McCain said the first regional objective should be the “peaceful change of regimes that are irreconcilably tyrannical, anti-American and hostile to the democratic regional order that we seek to build,” referring chiefly to Iran. 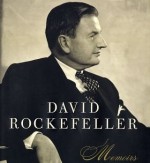 David Rockefeller: Guilty, and Proud of It

“Some even believe we are part of a secret cabal working against the best interests of The United States, characterizing my family and me as ‘internationalists’ and of conspiring with others around the world to build a more integrated global political and economic structure – one world, if you will. If that’s the charge, I stand guilty, and I am proud of it.”
Rockefeller was chairman of the Council on Foreign Relations,1970-1985. He is now honorary chairman.