The Dark Gnostics: Eugenics and the Occult 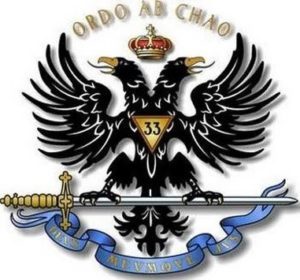 ‘Plandemic’ pretext fits future Revelation narrative’
‘he causeth all…to receive a mark’
No, the current COVID-19 pandemic does not mean that the great tribulation described in Revelation has begun. Current conditions do not project anywhere near the biblical portrayal of that apocalyptic period. Not yet, anyway…. 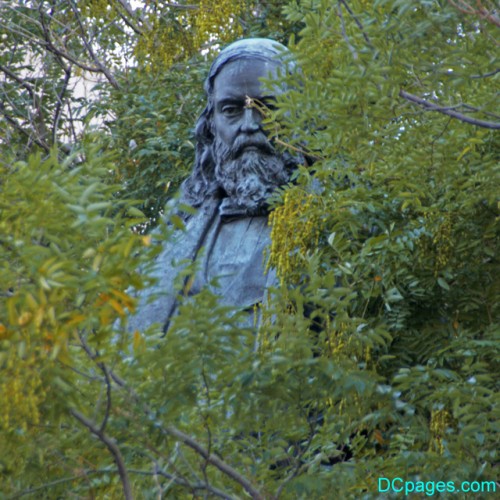 Facing north, just three blocks from the U.S. Capitol Reflecting Pool in Washington, D.C., stands a statue of Albert Pike, the most revered Grand Commander of the Scottish Rite Freemasons in history.

Requiring a a joint resolution of Congress to be erected and maintained by the National Park Service, the statue portrays Pike standing with one of the books he authored, Morals and Dogma, in his left hand.

The Pike statue was dedicated on October 23, 1901 in front of the Scottish Rite secret society’s House of the Temple in Washington. In 1977 the monument was relocated to its present site between the Department of Labor building and the Municipal Building, between 3rd and 4th Streets, on D Street, NW. 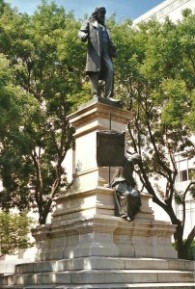 Pike, a Confederate brigadier general during the Civil War, is the only Confederate soldier to have a monument statue on federal land in Washington.

Pike is so greatly honored by the Scottish Rite Freemasons that his body is entombed in their House of the Temple, and an entire room of this building is a museum dedicated to his memory.

Facing west on the southeast corner of 16th St. NW and S St. NW, the House of the Temple is the national headquarters of the Scottish Rite Supreme Council, 33°, Southern Jurisdiction, USA, the “Mother Supreme Council of the World.” 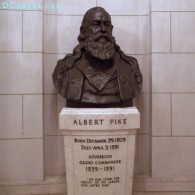 A bust of Pike is prominently centered at the top of the Grand Staircase, and another is displayed at his tomb. The Pike Museum features 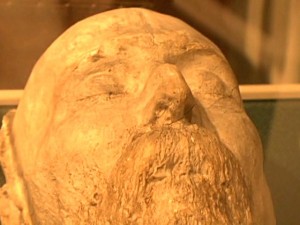 his books and memorabilia, including the death mask of the most well-known authority of  Scottish Rite Masonry.

The book Morals and Dogma, written by Pike and portrayed in the left hand of his statue near the U.S. Capitol, was first published in 1872. A copy of Morals and Dogma was given to each new member of the Southern Jurisdiction (35 states in the U.S.) until 1974, when its increasing notoriety contributed to the practice being discontinued.

The book’s pages give undeniable, conclusive evidence as to Pike’s Luciferian mindset, and by extension to that of the Scottish Rite secret order that he represented and that still displays him so prominently. Here are a few of the book’s quotations (emphasis added): 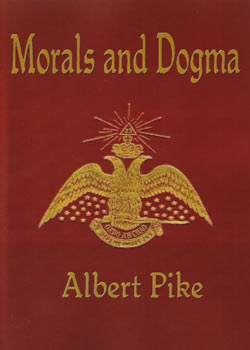 The Apocalypse is, to those who receive the nineteenth degree, the Apotheosis of that Sublime Faith which aspires to God alone, and despises all the pomps and works of Lucifer. Lucifer, the Light Bearer! Strange and mysterious name to give to the Spirit of Darkness! Lucifer, the Son of the Morning! Is it he who bears the Light, and with its splendors intolerable blinds feeble, sensual, or selfish Souls! Doubt it not! for traditions are full of Divine Revelations and Inspirations: and Inspiration is not of one Age nor of one Creed. Plato and Philo, also, were inspired.      Morals and Dogma  p. 321

There is in nature one most potent force, by means whereof a 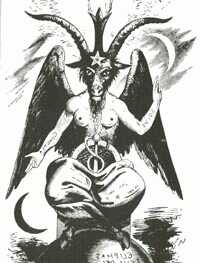 single man, who could possess himself of it, and should know how to direct it, could revolutionize and change the face of the world. This force was known to the ancients. It is a universal agent, whose Supreme law is equilibrium; and whereby, if science can but learn how to control it, it will be possible to change the order of the Seasons, to produce in night the phenomena of day, to send a thought in an instant round the world, to heal or slay at a distance, to give our words universal success, and make them reverberate everywhere. This agent, partially revealed by the blind guesses of the disciples of Mesmer, is precisely what the Adepts of the middle ages called the elementary matter of the great work. The Gnostics held that it composed the igneous body of the Holy Spirit and it was adored in the secret rites of the Sabbat or the Temple, under the hieroglyphic figure of Baphomet or the hermaphrodic goat of Mendes.

There is a Life-Principle of the world, a universal agent, wherein are two natures and a double current, of love and wrath. This ambient fluid penetrates everything. It is a ray detached from the glory of the Sun, and fixed by the weight of the atmosphere and the central attraction. It is the body of the Holy Spirit, the universal Agent, the Serpent devouring its own tail.         Morals and Dogma p. 734

Of course, neither George Lucas’ Star Wars nor Pike’s Dogma was the first to introduce the concept of the force. Lucas simply repackaged for his contemporaries the same ideas taught by Pike to his generation a century earlier. Indeed, Lucas credited his mentor, Hero of a Thousand Faces author and myth-teller Joseph Campbell, with influencing his work. The dogma of these writer/philosophers became known as “New Age,” but it’s just old occult.

In light of these quotations from Morals and Dogma, a letter purported by many to be authored by Pike on July 14, 1889 does not seem farfetched. The letter’s authenticity is disputed by many masonic organizations, but its alleged content is consistent with the tone of his book.  In the letter, Pike is reported to have written:

Yes, Lucifer is God and unfortunately Adonay is also God….The true and philosophic religion is the belief in Lucifer, the equal of Adonay; but Lucifer, God of light and God of good is struggling against Adonay, the God of darkness and evil.

The masonic dispute of this letter appears to be specious, and indeed reflects another of Pike’s tenets in Dogma, revealed in this quotation:

This reveals why many members of the Freemasons insist that their secret society is benign: They are either deceivers, or they are being deceived.

Pike’s secrecy and deception must have been what Freemason spokesman Manly P. Hall was referring to as the means to achieve Pike’s Luciferic “enlightenment” as the basis of world government:

Contrast the deception and secrecy of Pike and Hall with the words of Jesus Christ:

I spake openly unto the world…and in secret have I said nothing.  John 18:20

19. A Lamp in the Dark: The Untold History of the Bible

‘WHO WILL WATCH THE WATCHMEN?’