As it has for decades, the media establishment’s recent fake news about fake news has contained assertions that any accounts of a developing “New World Order” are part of a crazy, xenophobic “conspiracy theory.”  Media pundits perpetuate this myth even though graduates entering their profession from numerous universities increasingly have–or have rubbed shoulders with those who have–completed coursework in a curriculum called “global studies.”

Global studies programs build upon the old international studies curriculum that aspiring diplomats, political science majors and journalists have commonly received training in, but one should not be confused with the other. International studies primarily examine relationships between and among nations, while in global studies the students study “globalization” with a perception that they are “global citizens.” 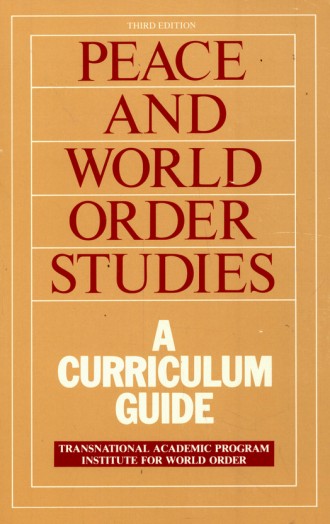 A curious mind game is performed upon students in global studies programs. Contrary to the fact, they teach that globalization is an inevitable reality, but then proceed to educate the students in ways to achieve it. The UCLA Global Studies web page explains it this way:
Global Studies students are not only given the tools to understand the processes of globalization and their consequences, they are empowered to shape their world as the next generation of global leaders…

“Global studies” is today’s euphemistic successor to “world order studies” that began to spring up in colleges, universities and even high schools in the 1960s and ’70s. A pioneering textbook for global studies was first published in 1978 under the title, Peace and World Order Studies: a Curriculum Guide. It is now in its seventh edition, and is still being used and referred to in many global studies programs.

During Wien’s time there, according to her resume, the WPI “Promoted the establishment of over 200 university degree programs in global studies and peace. Awarded grants, fellowships and seed money to academics. Surveyed 10,000 professors on the intellectual content and curriculum design of their courses and programs.”

In a 2012 article on its World Policy Blog website entitled,  From the Institute for World Order to the World Policy Institute, the WPI recounted their euphemistic name change:
During the summer and fall of 1982, we developed a plan for the Institute, including a name change “to reflect a new pragmatic approach to building a humane and just world order,” in the words of an announcement made on January 1, 1983.

Peace and World Order Studies contained an essay by Burns H. Weston, entitled Peace and World Order Education: An Optimal Design. On page 59, Weston wrote:
I take as my guide the broad contours of what has come to be known as ‘peace studies’ and ‘world order studies’ (sometimes also as ‘developmental studies’ and ‘global studies’), a process of education that has been gaining throughout the world, even if slowly, in recent years. 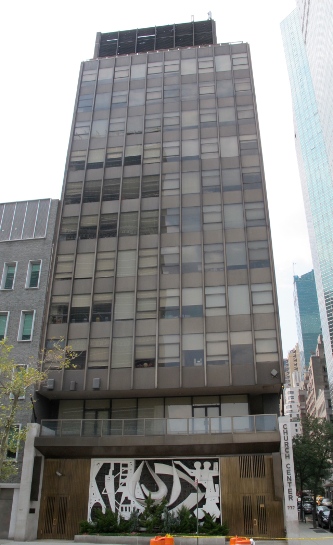 The Church Center, 777 United Nations Plaza, across the street from the UN Building, housed both the Institute for World Order and Planetary Citizens in the 1970s

This book examines what the UCLA Global Studies department would call one of the “processes” of globalization: regionalism. An included essay, entitled Regional Blocs, World Order and the New Medievalism, states this:
The emerging economic geography is regional rather than global, and a distinctive aspect of the emerging world order is the creation or consolidation of regionalist projects (NAFTA in the Americas, the EU in Europe and ASEAN in Southeast Asia).

Regional, planetary citizens
Another global studies textbook is Thinking Globally: A Global Studies Reader, published in 2014 by the University of California-Berkely. In an attempt to extrapolate from the “processes” of globalization an emerging regional and global “citizenship,” it asserts:
Citizenship…is becoming increasingly national and local, regional, global at the same time. In addition, citizenship is no longer as state-centered as it used to be.

Early editions of Peace and World Order Studies: A Curriculum Guide listed the Institute for World Order’s location as 777 United Nations Plaza in New York City, across the street from the UN Building. Over the years, the building has housed various non-governmental organizations (NGOs) associated with the UN. Also located there during that 1970s time period was an organization named Planetary Citizens. The global jurisdiction implications of their “citizenship” are well defined in a pamphlet released by that organization that included this declaration: 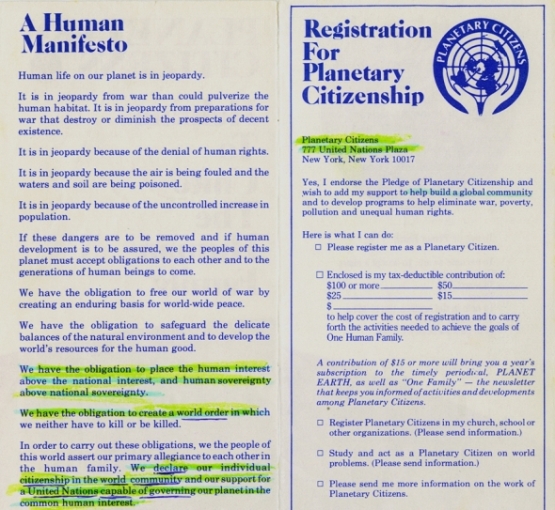 We declare our individual citizenship in the world community and our support for a United Nations capable of governing our planet in common human interest.

Listed as an honorary chairman of Planetary Citizens was former UN Secretary General U Thant, and included on the list of endorsers was former U.S Supreme Court Chief Justice Earl Warren. They certainly were aware of the legal implications of “citizenship.”

Many of these utopian-minded globalists would not consider themselves or their objectives to be inherently evil, but theirs is a problem of perception–not only of themselves, but of the entire human race. They have bought into a delusional mindset that believes humans are intrinsically good, or at least perfectible by their own efforts.

They apparently reject the historical fact, demonstrated in the evil regimes of the past century alone, that “power corrupts, and absolute power corrupts absolutely.” That axiom is based upon the observation that the human heart is at best unstable, with a penchant for being, as the Bible describes, “deceitful above all things, and desperately wicked…” (Jeremiah 17:9). It cannot be given unchecked reign within civil society.

Checks, balances and xenophobia
So it is imperative that governments of free nations, being by extension a harnessing of this individual human nature, should have checks on them as well–specifically, checks, balances and limited jurisdictions upon and within them. Any attempt to consolidate power and expand toward larger and fewer jurisdictions must be looked upon with suspicion, particularly if it is accompanied with a call for “more efficiency” in government or regulations of commerce.

Often, open-border, “free trade” proponents cry “xenophobia” toward those who want border checks. But open-border proponents should be prepared to admit that under their belief, the checks, balances, and limited jurisdictions outlined in the US Constitution itself would also be labeled xenophobic. That’s because they display the same “irrational” distrust of humanity as that which is intended for simple border control.

Well, checks, balances and limited jurisdictions do reflect a distrust of humanity–all humanity–but they are not irrational. They are a good thing, reinforced by the hard lessons of history and common sense. Along with those self-evident rights of all human beings beyond the jurisdiction of governments, they are the linchpin of American liberty, and the independent nation-state is the ultimate check and balance in a civilized world.

John Ruskin
One prominent educator in Victorian Britain who expressed the fallacious utopian socialist mindset was John Ruskin. An outspoken professor at Oxford University, Ruskin advocated for expanded, unchecked power for elitist groups and individuals in an authoritarian rule over the rest of humanity. In his book, Unto this Last, published in 1860, Ruskin wrote:
My continual aim has been to show the eternal superiority of some men to others, sometimes even of one man to all others; and to show also the advisability of appointing such persons or person to guide, to lead, or on occasion even to compel and subdue, their inferiors according to their own better knowledge and wiser will. My principles of Political Economy…were all summed in a single sentence in the last volume of Modern Painters–“Government and co-operation are in all things the Laws of Life; Anarchy and competition the Laws of Death.” 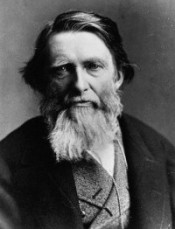 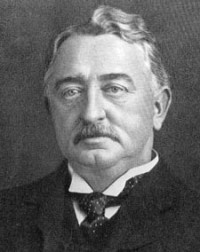 Ruskin had a great impact on one of his students, Cecil Rhodes, so much so that Rhodes carried a copy of Ruskin’s inaugural lecture with him for thirty years. Rhodes would become the Africa diamonds mining magnate, and the country of Rhodesia, now known as Zimbabwe, was named for him.

Rhodes was a founding member of the British Round Table Groups, and his great wealth also allowed him to initiate the Rhodes Scholarship program at Oxford. Both of those organizations were dedicated to carrying out Ruskin’s vision for elitist domination of the entire planet.

Rhodes and his associates understood that their objectives would not be achieved overnight. They recognized that it would require what generations later the Institute for World Order would also recognize as a “pragmatic approach.” Today, that movement has grown to such an extent that efforts to thwart it will also not be accomplished overnight, a Donald Trump nationalist presidency notwithstanding.