Why Are Jeff Miller, Others in Congress, Senate Promoting the Political Federation of East Africa? 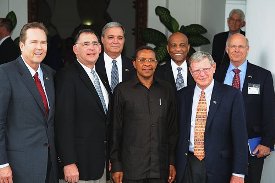 On April 12, 2012 at the State House in Dar es Salaam, President Jakaya Mrisho Kikwete (centre) met with a delegation of five members of the United States’ Senate and House of Representatives serving in the Senate and House Armed Services Committees. The delegation led by Senator James Inhofe from Oklahoma (right front row). Others in the picture (from left to right) are Congressman Vernan Buchanan from Florida, Senator John Boozman from Arkansas, Congressman Jefferson Miller from Florida, U.S. Ambassador to Tanzania Alfonso E. Lenhardt and Congressman Steven Pearce of New Mexico.
(Photo: U.S. Embassy, Dar es Salaam)

EAC SECRETARY GENERAL RECEIVES US SENATORS
Tanzania Daily News 4/15/12 Senators and Representatives of the Congress from the United States of America… paid an official visit to the Secretary General for the East African Community, Dr Richard Sezibera, in Arusha…. The delegation led by Senator James Inhofe,…. also included Senator John Boozman (Arkansas), Congressman Jeff Miller (Florida), Congressman Steve Pearce (New Mexico) and Congressman Vernon Buchanan (Florida)…. Also in attendance was the EAC Deputy Secretary General in charge of Political Federation, Ms Beatrice Kiraso. In his remarks, Senator Inhofe praised the Secretary General for leading his troops in the integration process…. Senator Inhofe further noted that the USA was keeping tabs on the progress and developments at the EAC.
EAC to draft constitution for political federation

New Vision (Uganda), Sept 12, 2013 – The East African Community (EAC) is to name a team to draft the Constitution for the regional political federation….[Ambassador] Hatega said Uganda, Kenya and Rwanda started on the process in June and were later joined by Burundi during the August Mombasa summit. He explained that the treaty that established the EAC stipulated four steps namely the customs union, common market, monetary union and the final stage of political federation.
How could these members of the U.S. Congress and Senate go to the East African Community to promote this “free flow of goods, services and people” across national borders — and actually meet with the EAC deputy secretary general in charge of facilitating the political federation of those nations — and it not occur to them that this so-called free-trade “free flow” objective is the main cause for the derelict border policy on our own borders in the U.S.? The “free flow” mantra is an integral part of the so-called “free trade” agenda, and inevitably leads to integrated political jurisdiction as in the EAC.
NAFTA tribunals now claim authority to overturn U.S. Supreme Court commerce decisions, and thus claim North American jurisdiction.

A Letter to My Congressman

Despite the “situation ethics” cited for rebuilding Afghanistan and Iraq, a sizeable majority of Americans are generally opposed to the concept of “nation-building.” Surely, that is why the American public has not been plainly made aware that U.S. foreign intervention policy goes far deeper than mere nation-building. It is “region-building” – in Afghanistan, Africa and elsewhere – through the development of multilateral economic and security agreements that are designed to morph into geopolitical regional jurisdictions.
….At varying stages, all of these geopolitical regions, including North America, are pursuing the same “region-building” objectives [as documented in the attached review], including:
● “Harmonization“ of trade, customs and industry regulations among the nations within each region.
● Integrated regional infrastructure, including regional power grids, pipelines and highways.
● Integrated regional courts, tribunals, parliaments and regulatory agencies that supersede national jurisdictions.
● Integrated military and law enforcement, with intelligence information sharing, ostensibly to fight terrorism and crime “that transcends national borders.”
● “Outer security perimeters” modeled after the European Union’s “Schengen zone,” within which there is to be a “free flow of cargo, services and people” among the nations within each regional perimeter. Only in this context does the motive for congressional and presidential dereliction in U.S. border security over the past several decades become clear.
● Economic and monetary integration, up to and including a currency in each region….
You, Representative Miller, have contributed to this region-building, with your reversal to vote for CAFTA in 2005 (your switch determined its passage), and your recent trip to the East African Community (EAC), to support and encourage those nations’ economic and political integration….