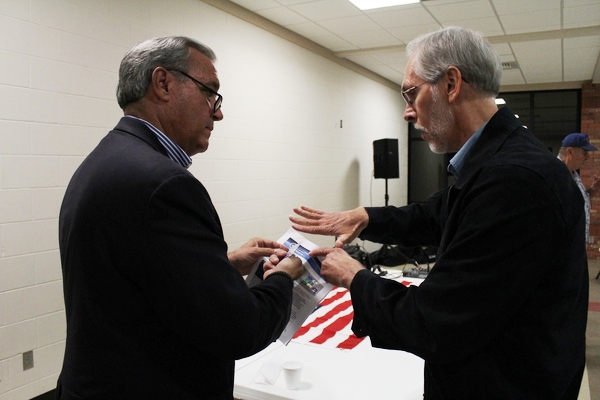 A Letter to My Congressman

Updated Nov 2014 – The following cover letter was hand-delivered on July 30, 2012, along with a printed news summary similar to this updated PDF, to the Pensacola, FL office of U.S. Representative Jeff Miller (R), receiving assurances that it would be sent right up with the congressman’s daily mail to his Washington office. Several follow-up phone calls both to his Pensacola and Washington offices were met with staff members’ non-recollection of the material, but that it would be looked into with a subsequent response.

Finally, this writer spoke with Rep. Miller after a Nov 11, 2013 Santa Rosa Tea Party Patriots meeting in Pace, Florida., at which time the congressman was informed personally of his office’s lack of response to the letter.

Upon receiving another copy of the letter and of this updated PDF, Rep. Miller replied that he had not seen it before, and promised to speak to his office about the lack of response. To date, no response or acknowledgement of receiving this material – either with the letter or in person – has been returned.

Despite the “situation ethics” cited for rebuilding Afghanistan and Iraq, a sizeable majority of Americans are generally opposed to the concept of “nation-building.” Surely, that is why the American public has not been plainly made aware that U.S. foreign intervention policy goes far deeper than mere nation-building. It is “region-building” – in Afghanistan, Africa and elsewhere – through the development of multilateral economic and security agreements that are designed to morph into geopolitical regional jurisdictions.

The attached categorized review of recent news articles and documents from around the world (that can also be found on my website, CircumspectNews.com) offers irrefutable evidence that U.S. economic and foreign policy has become dedicated to region-building. U.S. taxpayers – through funding of the World Bank, the International Monetary Fund, the United Nations, and direct foreign aid – have been underwriting this initiative for decades without receiving an open hearing of its aims and consequences.

Region-building is the ultimate in big-government central planning. Some would argue that it brings “security” among the nations within each of the world’s regions, and “efficiency” to multinational business and trade initiatives. However, such lofty goals are not the constitutional responsibility of the U.S. taxpayer. Moreover, the efficiency so desired by big-government / big-business interests smacks of Mussolini fascism. It also threatens national security, since the nation-state is our ultimate check against governing powers’ inevitable urge to consolidate and expand. Border security – like our representative, republican form of government – is meant to be cumbersome and redundant to check anarchist, subversive behavior by populations, factions, and powers, both foreign and domestic.

The benefits being presented for region-building are illusory. Progressive consolidation of national governance into the hands of a few regional bureaucrats does not bring security. Rather, it results in a fascist repression of all people, as big-government regulation, influenced by foundation-financed environmentalist and monopolist corporate interests, stifles economic independence and small-business free enterprise. The European Union, with its unaccountable eurocrats and international loan-shark banksters, is the prime example of this reality, and it is the template for all of the world’s geopolitical regions.

Regarding North America, evidence of the intent to integrate this continent is irrefutable, and is corroborated by news accounts from all other regional integration projects throughout the world, as documented in the attached review. At varying stages, all of these geopolitical regions, including North America, are pursuing the same “region-building” objectives, including:

●  “Harmonization“ of trade, customs and industry regulations among the nations within each region.
●  Integrated regional infrastructure, including regional power grids, pipelines and highways. The TAPI pipeline through South Asia will be part of Afghanistan’s integration into SAARC and its “New Silk Road,” just as the Keystone pipeline is part of the North American transportation / energy grid and ostensibly represents North American energy “interdependence.”
●  Integrated regional courts, tribunals, parliaments and regulatory agencies that supersede national jurisdictions.
● Integrated military and law enforcement, with intelligence information-sharing, ostensibly to fight terrorism and crime “that transcends national borders.”
● “Outer security perimeters” modeled after the European Union’s “Schengen zone,” within which there is to be a “free flow of cargo, services and people” among the nations within each regional perimeter. Only in this context does the motive for congressional and presidential dereliction in U.S. border security over the past several decades become clear. Such dereliction opens the door for the terrorism and the drug-crime “chaos” pretext that will encourage public acceptance of regionally integrated law enforcement, military and intelligence. The “Fast and Furious” gun-running operation that further empowered Mexican drug gangs is a prime example of this “chaos” methodology.
●  Economic and monetary integration, up to and including a common currency in each region

U.S. politicians and international business leaders, who have funded, supported, and encouraged this region-building throughout the world, then have the audacity to cite the economic and security threats from these developing regions as evidence for the need to regionalize North America as well.

You, Representative Miller, have contributed to this region-building, with your reversal to vote for CAFTA in 2005 (your switch determined its passage), and your recent trip to the East African Community (EAC), to support and encourage those nations’ economic and political integration.

If for some reason you have not realized the global region-building implications of your votes and actions in this regard, this review is meant to be helpful for you and your staff. The blood and treasure of Americans should not be invested in this global agenda that will do nothing but bring political and economic repression to the peoples of the world.

Thank you for your consideration of this crucial information in the defense of liberty.